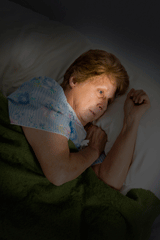 The Alzheimer's Gene In Plain English

If your parent has Alzheimer's, you may be at risk but that doesn't mean you will inherit it for sure. This article is a bit technical, but even a light reading helped me understand. If you become confused about alleles, scroll down for an explanatory video.

The APOE (apolipoprotein E) gene has different versions called "alleles." Scientists discovered that APOE e4 allele increases the risk of late-onset Alzheimer's. So it's helpful to find out if you have one or two APOE e4's. Sometimes the name is shortened to APOE4.

It's possible to inherit one copy of this gene from each parent so if you have two APOE e4 genes, you have a greater risk of developing Alzheimer's after you turn 60.

Researchers have found that this APOE e4 is associated with amyloid plaques in the brain. APOE-e4 is also associated with arteriosclerosis, high cholesterol and high triglycerides. These lead to fatty deposits in the arteries and organs.

You can be tested for the APOE e4 gene but this test will not tell you for sure if you will have Alzheimer's Disease. Besides, there are many Alzheimer's patients who test negative for APOE e4. Not everyone who has this gene get's Alzheimer's.

It has been nearly twenty years since the discovery of the APOE gene and it's variants. About 40% of the inherited or genetic effect that causes Alzheimer's has been attributed to APOE e4. The search for new genes that may cause Alzheimer's Disease has been very slow.

There continue to be new discoveries of genes related to Alheimer's as scientists unravel our genetic code. These discoveries can lead to the developement of treatments, including new drugs, that can slow the progression of the disease. Of course the greatest hope is to find a preventative and a cure.

The most recent discovery is a gene that affects accumulation of amyloid-beta, a protein believed to be one the main causes of the damage that underpins Alzheimer's Disease.

A new gene, MTHFD1L, has been discoverd and presented at an annual meeting of the American Academy of Neurology. The research comes from the Miami Miller School of Medicine and the gene is influenced by diet. Too little folate (or folic acid) will stimulate a gene that triggers Alzheimer's Disease. Folic Acid comes from fruits and vegetables.

Another new gene related to very aggressive Alzheimer's has been discovered. The gene, known as rs1868402 was announced by Alison Goate, at Washington University in St. Louis. The presence of this gene will alert doctors and families to a rapidly progressing disease and so will be an aid in treatment and family planning.

This gene, rs1868402, normally removes phosphate from a protein that supplies nutrients to the brain. The protein is called tau and researchers know it is involved in Alzheimer's. An abnormal form of rs1868402 leaves phosphate in tau, causing the protein to become tangled and stop working.

Another newly discovered Alzheimer's-related gene is called PSEN1 or presenilin-1. The discovery was announced by Dr. Ralph Nixon at New York University's Langone Medical Center. Presenlin 1 and 2 have been known to cause early onset Alzheimer's disease but the new research tells us just how this gene does it's dirty work. PSEN1 normally plays a role in digesting toxic proteins. When the gene is faulty, the toxic proteins just build up in the brain. This is a big clue that could help with drug development. The project included researchers from the U.S., Europe, Japan and Canada.